A find in the basement 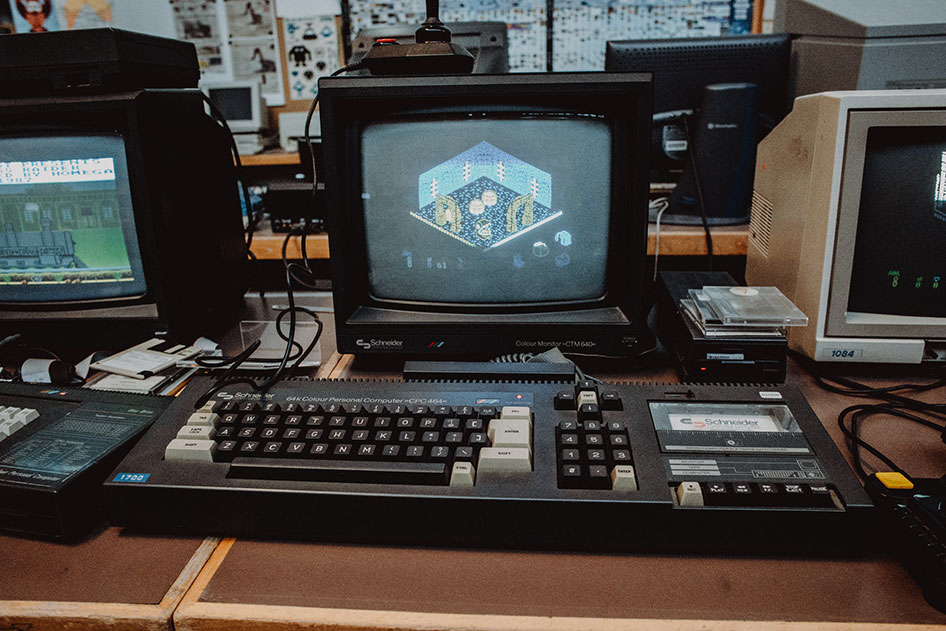 23 years ago at the Gymnasium Bäumlihof (GB): The student Jürgen Hench was looking for an old computer for a theater performance. He found one in one of the school's civil defense cellars: A Commodore CBM 4032, similar to the famous PET 2001. But the original name (pet engl. = pet/loved: Personal Electronic Transactor) had to be changed to CBM (Commodore Business Machines) for trademark protection reasons.

This find has a before and an after story.

Around 1980, the computer science courses at the GB had begun, on so-called "dumb terminals", devices without their own computing capability. For the teacher Marcel Sutter it was "his finest hour" when a student brought him such a CBM into the course. He was so enthusiastic about the device at that time that he applied for and received a lot of money from the city of Basel for the purchase of 6 of these devices. That was the beginning of computer science lessons for whole classes in the GB. The rapid development of "personal computers" (PC) soon led to the replacement of the CBM computers by successors, among others the famous Commodore C64 and the IBM PC. The CBM computers that were no longer needed were stored in the air raid shelters instead of being disposed of. And that brings us back to the beginning: use as theater props.

The result is no less spectacular. Said student inspired Dr. Gerald Süss, one of the computer science teachers, as well as the school administration to make a museum out of the well-preserved equipment. That was the beginning of the "Computer Museum Gymnasium Bäumlihof", CMGB.

Over the years, this grew tremendously and the museum's activities outside the school also became more extensive, including participation in museum nights in Bern and Basel, in Art Unlimited and the Shift Festival. With the establishment of the Game Lounge, a collection of historical game computers and consoles, more sought after than computers, especially by the young public, a second focus emerged.

As of 2014, the GB underwent extensive renovation. For the museum operators, this meant finding a new location and temporarily relocating all exhibits. The new rooms were found in an appropriate ambience at the company ColoBâle AG, which operates a professional data center in the historic halls of the former Schindler Group on the current Magnet site in Pratteln. ColoBâle AG is managed by Stefan Mayer. He was also a former GB student.

Here the museum regularly presents itself to the public. And here you can also admire the eye-catcher of this article, all the mentioned successors and predecessors, as well as many other devices that document the development of computers in the broadest sense.

Half of the 200 m2 hall is taken up by the Retro Game Lounge, aimed at children and the young at heart.

The return with part of the exhibition to the GB was always intended: Just in time for its 50th anniversary, the original museum could be reopened there and is available for school lessons.